The Nasty World Of Online Reviews

Opinions are like assholes, everybody has one. The opinions of peer travellers help you make smart choices to get the best from your precious time in a new city but online review platforms can also be used by assholes, like the assholes featured below, to lie to you & damage their competitors. Bit sad really.

We recently noticed a number of negative reviews appearing online for our Backpacker Pub Crawl in beautiful Barcelona. “This is strange”, we thought, “our Barcelona Pub Crawl rocks balls!” So, we did some investigating and soon found that these bad reviews are, as suspected, near Donald Trump levels of bullshit.
In fairness, these idiots made it pretty easy to establish that their reviews are sinister fakes so, for your amusement, here are some good examples of how not to post fake reviews of a rival company online.

It seems Mathilde Eriksen put as much effort into this fake review as she did in hiding the fact she works for the competitor pub crawl. You could have just written “bad!” Mathilde would have taken even less effort. Maybe next time. 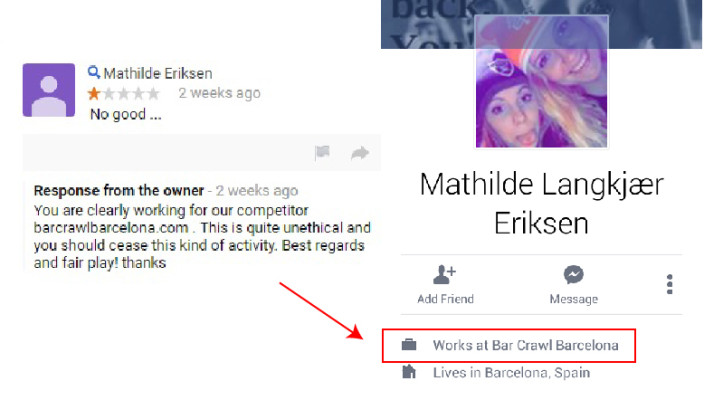 Cody doesn't seem to care much about hiding where he works either. Maybe this kind of thing is part of the job spec. 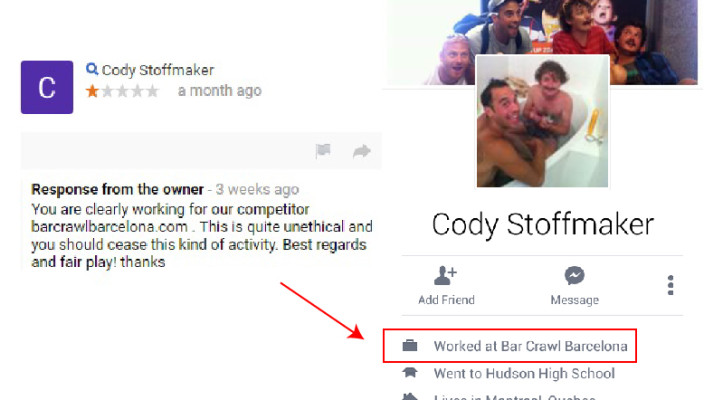 Luis Wilks actually put a bit of imagination into fabricating this little story, well done Luis, but we see you just so happen to be friends with all the other fake reviewers featured. Wow, what a small world of funny coincidences we live in.

Here's hockey-nut Bart. A bit of effort put in here, too, although he seems a little confused as to what exactly he's supposed to be trash-talking. He seems to be fake-reviewing a place rather than a Pub Crawl. Perhaps his friend Brent, who just happens to be the competitor company owner, can explain to him what a pub crawl is.

And here is the aforementioned Brent Wiese, the owner of the competitor pub crawl. Despite struggling to spell the word "worst", Brent has managed to add a bit of emotion to proceedings here with the imaginative use of caps locks. YOU'RE TALKING BOLLOCKS, MATE!

Here's Adam Brigante, looking like an absolute legend and sporting a rather fetching green headband from the John Rambo 1986 Rave collection as well as the guide's vest of our competitor's company. Quite silly when you're posting fake reviews of other companies, but Adam even lists our competitors as his employer and has posted only 3 reviews: two negatives for us and another competitor, and one glowing review for his own pub crawl, proclaiming it to be “the best in Europe”, not “in the world” mind you, that would just be too ridiculous.

Riley Sheehan likes headbands, too. Albeit here he's decided to utilise it as a fashionable neck accessory, which, it has to be said, is just darling and compliments that sexy pub crawl guide vest wonderfully.

And last but not least, Macarena Paz, posing here for a fun-filled snap with, yep, the one and only Brent Wiese, the owner of the competitor pub crawl. Note the fashionable headband come neck-tie here too. Not content to just leave a fake review for our Pub Crawl through, Macarena also decided to lie about our fantastic Free Walking Tours in Barcelona (our guides are never late or rude, lady!). A quick click on Macarena's profile also reveals three negative 1-star reviews for other Pub Crawl competitors and a delightful 5-star review for, you guessed it, her own pub crawl.

So, there are a few things to be learned here:

We've been pub crawling for over 15 years now and that's a testament to our commitment to quality and being great at what we do, so it's really disappointing when our reputation is unfairly tarnished by people demonstrating a distinct lack of integrity and ingenuity.
We hope this little exposé will help keep you all mindful and to use caution when relying on reviews to make decisions about what to do or not do when travelling, particularly on forums where anyone can write what they want to, rather than only being able to review having been a genuine customer.

Thanks for reading and please share this to make other travellers aware of the kind of idiots out there trying to deceive them.